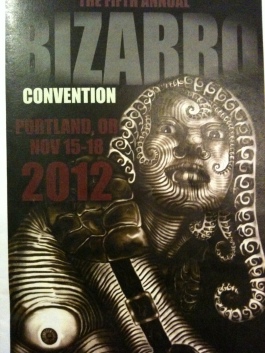 BizarroCon is an annual event held just outside Portland Oregon. Bizarros travel from all over the place to do workshops, attend readings and performances, meet, drink Rose O’Keefe’s amazing beer, talk shop and connect. This year we not only had people  from all over the country, but from Spain, Australia and England. We’re going international, bitch!

It’s a beautiful experience.
2012 was my third year in attendance and the sense of community never ceases to amaze and overwhelm me. The deep gratitude for everyone being a part of it resonates through the internet as soon as we all return home.

My first year: I was nervous and excited.
Completely blown away by a talented and beautiful community of artists, my heart swelled, exploded, reassembled and wanted nothing more than to be a part of it.

My second year: Terrified in the best possible way.
Published under NBAS for a year “trial”. Excited, proud, honored, determined.

That’s right. For all of you who have been wondering how my NBAS trial went: I GOT IT!
EHP is signing me to a THREE YEAR CONTRACT!

I am still in shock.

First off, thank you.
Thank you to anyone who bought a copy (or copies) of Trashland A Go-Go, wrote a review, shared a link, told a friend and supported me in this endeavor. My sales were so much better than I could have dreamed. It means so VERY much to me.
Thank you to everyone at EHP for welcoming me.
Thank you to my fellow NBAS 2011- 2012 authors who were the best possible group to work with.Especially Spike Marlowe for her ridiculously thoughtful gift this weekend ❤  I couldn’t have asked for a more supportive and loving group to work with. I look forward to working with them for years to come.

Extra warm and fuzzy thank you to Kevin Shamel for all his hard work, being there, and just believing in me in general. His faith in me was a huge motivation to me over the last year.

I committed  the last year of my life to Trashland, the NBAS, and Bizarro as a whole and it paid off in the most fan-fucking-tastic way.
In 2006 my brother Kevin lent me copies of Teeth and Tongue Landscape and Angeldust Apocalypse. I was an instant fan. I never dreamed that I would get to be PART of this. And now I am and I couldn’t possibly be any fucking happier.

When I sat down in the very last row of seats on my flight home from Portland, I stared  out the window worrying about the weather because I HATE flying, and suddenly it hit me. I have a contract. They signed me. They want ME. I get to be a part of this.
I’ll spare you the weepy details. Let’s just say I was really glad I was sitting alone at the very back of the plane.

It’s very exciting, but it also means that I have a lot of work to do.
I can’t wait!

The rest of the weekend was a blast as always. I did the High Concept Workshop run by Jeff Burk on Friday morning and my pitch was “purchased” the most with Bizarro Currency- some sweet dinosaur trading cards. 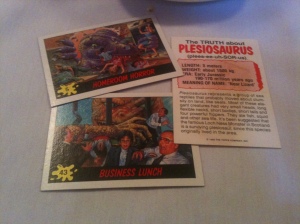 Then it was off to the Writing for a Cult Audience workshop with Carlton Mellick III. I now belong to a publisher that hands out booklets like this:

The advice, in case you were wondering, is totally awesome and shit.
I also belong to a publisher that wants all of it’s authors to succeed. A publisher who believes in publishing authors, not books. What does that mean? It means they care about the author. It means they want to nurture that talent and brand. It means they are exactly where I want to be.

The rest of the weekend we had panel discussions, readings, art, dinners and the ULTIMATE Ultimate Bizarro Showdown! The Showdown is usually hosted by Jeremy Robert Johnson, but this year we were graced with the hosting talents of Famous Author Mykle Hansen. That man is a fucking delight. Every time Mykle opens his mouth I love him a little more.

Now there is nothing left to do but wait for next year and blow up Kevin’s inbox with story pitches.

This is also the Winter of the Desk. Three years in a row I have listened to authors on panel talk about how important it is to have a space to work in. Hell, I bought, read, and adored A Room of One’s Own. I should have gotten it a while ago. But I always had the excuse of “not having space”. Well, not a goddamn thing is being done with the giant box of dvds between my dresser and my overstuffed bookcase. Time to get my head back on straight. It’s been a really rough couple of months with working two jobs, the passing of my mother and working toward this contract. This weekend was exactly what I needed. I feel recharged, and I know I am not the only attendee who feels that way. Because it’s part of what we do there.

I could go on for days about every little thing, and how Wonderland Award Winning Author Laura Lee Bahr is the most fun roommate in the entire fucking world, even if she makes you cry when she wins things she very much deserves and drinks atrocious beverage concoctions. Then this blog would never end, so I’ll leave you with a photo gallery and a whole mess of captions.
Thanks again to everyone who made this event what it is. It’s meant a lot to me over the last few years, and I don’t see that changing any time soon.
360 DAYS ‘TIL BIZARROCON!

Several images were poached from C. V. Hunt and Tiffany Scandal. Thanks ladies!

3 thoughts on “Attack of the Photo Blog: BizarroCon 2012 Edition!”