It would seem that this space has been pretty neglected. For several months. So, you’re saying to yourself “Constance, what in the world have you been up to? What’s the fucking deal?”

I fell off after the holidays. Most of my previous posts were about the build up to BizarroCon 2010. Then my brain was on a magnificent overload and I couldn’t really articulate the experience. Just a lot of “OMG!” and grunting happily.

I pitched a story for the High Concept Workshop about a stripper who has a terrible accident on stage, is electrocuted and thrown away by the club’s owner. When she wakes up she is in an enchanted landfill. Adventure ensues.

It work shopped well. So well in fact, that it (as well as myself) moved on to the second workshop, run by infectious enthusiast for life John Skipp. I paired off with Kevin Shamel, who helped me flesh the idea out into an actual story using John Skipp’s Note Card Method. 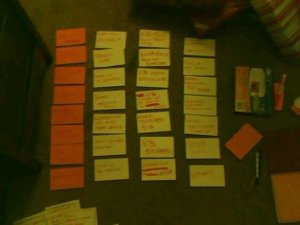 Which later, due to my limited floor space, morphed into the “Giant Neon Post-It Notes on My Closet Door Method.”

Once I got home, I sat down a couple of times to write but it wouldn’t come. I stared at the note spread for months, stewing on it.

Then a mess of things happened. Three people died in the space of a month, my living situation shifted, and things just felt really difficult. But then all these great things fell into place. A perfect distraction.

I volunteered, a long with Sam Reeve and William Pauly III, to be a contributions editor for Bizarro Central and now work on keeping the site interesting and filled with fun weird content as well as keeping people up to date on all things Bizarro related. It’s actually turned out to be a bit more work than I anticipated. I love it.

Kevin Shamel joined the Eraserhead Press Team and landed the job of New Bizarro Author Series editor. I sat down and wrote the book that had been percolating in my brain for months, and sent it to Kevin for consideration.

I can tell you right now, no matter how busy you know someone is, waiting to hear back from them about your first attempt at getting something published is ROUGH. It’s agonizing.

But the gratification when they officially accept your work is ten times that. Which means, yes, my novella was accepted to the NBAS and will be out later this year.

I thought that seeing red ink all over my words would feel worse. But if I am honest, I enjoy it. I feel like I have been learning a lot of my bad writing habits. At least I hope I have. I have been noticing them more. I delete and cross out a lot more these days anyways.

While going through this process I randomly decided to finish reading Ham on Rye, which was lent to me over a year ago.

It’s like hearing the right song at the right time. The way Bukowski has no problem being direct. He tells the story, just as it happened, but with flavor. With voice. Saving up all those really great lines for the right moment. Suckerpunch. It reinforced the idea that “More words do not make better writing.” Something I hope to keep in mind. Just to make sure, I read and finished Hollywood that same week.

So, now I am finishing up my revisions before I send them back to Kevin for further review, my cover art is in process and I couldn’t be happier with the artist! She really nailed it and I can’t wait until it’s all together. Or at least until I can show everyone.

At some point in the not to distant future, I will have a book. There will be a book with great art on the cover, with my name and my words inside.

And I couldn’t be happier. It’s already August, so BizarroCon2011 is coming up! I can’t wait! I wasn’t sure I was going to make it this year. It isn’t exactly in the budget. But with the book coming out, I sort of HAVE to be there. So will. I will figure it out. I always do.

If you want to help me figure it out by donating your hard earned cash to my cause, I will not object.

You can give me BizarroCon intended moneys for my birthday at the end of the month and I will be the happiest girl in all the land. I am not afraid to take your money.

In other news not related to the contents of your bank account – my name at the end of the Bizarro Authors page is linked to this blog. Which was a really neat little surprise! But I haven’t been updating. So, I decided to give myself little assignments to add some flavor (and content) to this trainwreck.

First- Things I Love Thursdays. It is what it sounds like. On a Thursday I will tell you all about the various random things upon which I am fixating.

The Photography of Mariel Clayton.

There will almost always be a music something. There is always a song i am obsessing over

Second- More stories about my job in an adult shop and how my job has affected my poor dissolving brain. Of course, this is all planned around editing my novella, Bizarro Central, and my actual job.

But check it out, I’m making words now!